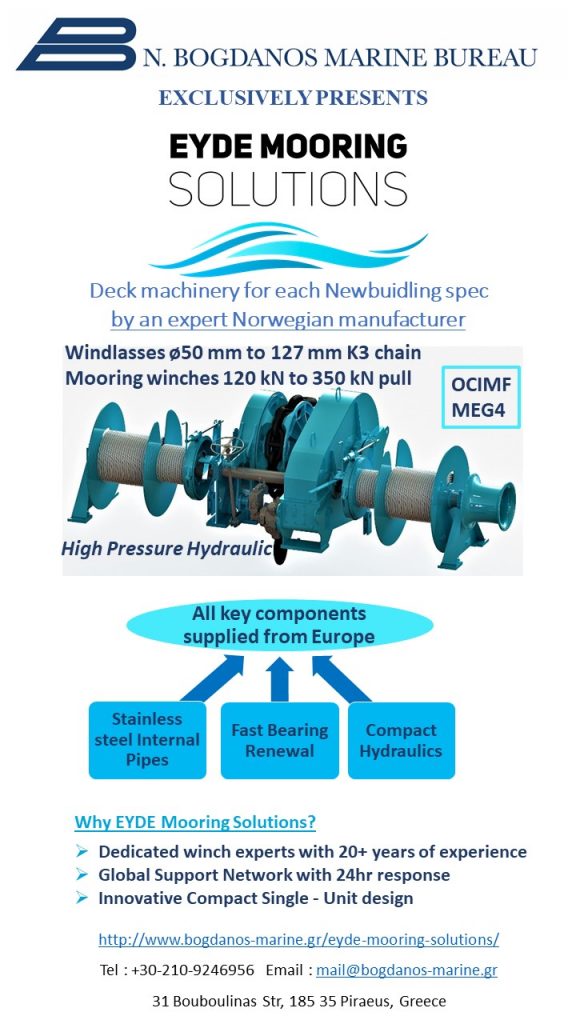 In the recent years there has been much change in the supplier situation of deck machinery for merchant vessels. Previously major suppliers like Rolls-Royce, Pusnes, Kocks (TTS), Hatlapa etc. dominated the market.

EYDE is a competitive supplier in the market, based on design from Norway and with focus on the end customer, the shipowner/shipmanager. EYDE has by now spent 2 years to develop its full range of deck machinery and is now providing it to the market, having set up its own supplier network, based on suppliers with many years of experience in manufacturing parts for deck machinery. EYDE’s production is done in Dalian, China, with a company which has supplied deck machinery for several OEM’s over the last 20 years (see attached short DSIC presentation & reference lists). Vital parts like hydraulic motors (STAFFA, KPM, UK), hydraulic pumps (KPM, UK) and electric motors are supplied from Europe.

EYDE has built and successfully tested a prototype winch which can be inspected at the DSCIC factory in Dalian (see att.). Also, Hyundai Heavy Ind. in Korea has audited and approved its factory, is approved by Daehan Shipbuilding and STX O&S in Korea and China.

About the Author: Bogdanos Marine

This website uses cookies to improve your experience while you navigate through the website. Out of these, the cookies that are categorized as necessary are stored on your browser as they are essential for the working of basic functionalities of the website. We also use third-party cookies that help us analyze and understand how you use this website. These cookies will be stored in your browser only with your consent. You also have the option to opt-out of these cookies. But opting out of some of these cookies may affect your browsing experience.
Necessary Always Enabled

Performance cookies are used to understand and analyze the key performance indexes of the website which helps in delivering a better user experience for the visitors.

Analytical cookies are used to understand how visitors interact with the website. These cookies help provide information on metrics the number of visitors, bounce rate, traffic source, etc.

Advertisement cookies are used to provide visitors with relevant ads and marketing campaigns. These cookies track visitors across websites and collect information to provide customized ads.

Other uncategorized cookies are those that are being analyzed and have not been classified into a category as yet.

SAVE & ACCEPT
Go to Top